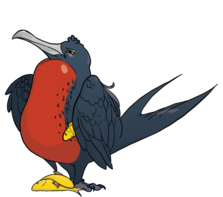 HOW did the Gang's reporters get from their remote homes to Brassmonkey Bay?

'The Birds of Harvest Island'

WHISTLER is a Central Australian Superb Lyrebird. He has an extraordinary repertoire of vocalizations ranging from birdsongs and camera shutters to chainsaws. Hunted to near extinction in the late 20th century as decorations for feathered hats and fans, the adaptable Lyrebird made a strong comeback until Australia's Black Summer bush fires decimated wildlife populations.

TATTLER is an Abbott's Booby, an endangered species of seabird found only on Christmas Island.  They mate for life (up to 40 years) and lay only one egg every 15-18 months. On this remote island between Australia and Indonesia, many bird and animal species developed in isolation.  Although adapted for long-distance flight, the she remains near the island to forage for fish and squid. Development and mining reduced habitats and hence numbers to an estimated 2500 breeding pairs. 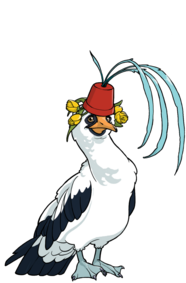 ​​​​TATTLER, WHISTLER, and BUZZ have the FACTS 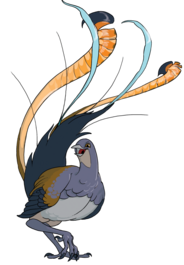