The Southern Grey Koala is a loveable marsupial with many unusual characteristics. For example, he has unique fingerprints like humans and TWO thumbs! Found primarily on Australia's south-eastern coastal regions, all koala species are increasingly threatened by habitat loss.  Koalas need to eat the leaves of about 1000 Eucalyptus trees in a lifetime to survive.  After the catastrophic 2019-2020 Australian 'Black Summer' bush fires, some experts believed koala populations declined by 80%. 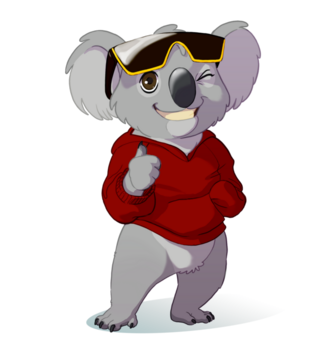 CHILLI was a poet and a loner.  He never dreamed that one day he would make a wild getaway with a Gang of Thieves.  Click below for MUSICAL CLUES about how he became the Zoo's Star and the Leader of his Gang!

CHILLI KOALA became the surprising STAR of the ZOO...

(After he arrived in a smuggler's shipping crate!)