JOCK is a Southeastern Red-tailed Black Cockatoo, the rarest of five subspecies of Australia's red-tailed black cockatoos. Intelligent, outrageous birds with a raucous call, red-tailed black cockatoos are a parrot species that may live half a century (in captivity). Often found in large flocks in the river redgums and bull-oaks they rely on for feeding and nesting, the Southeastern Red-tailed Black Cockatoo has been threatened by extensive land clearing. In the latest reports, some experts suggest there may be only 500-1500 of this subspecies left. 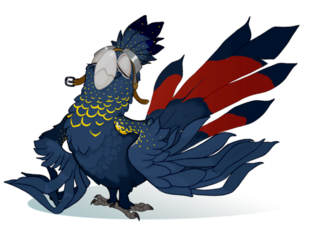 JOCK COCKATOO is the GANG'S HERO...

(WHEN HE KEEPS his mind on the job!)